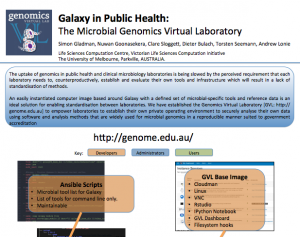 An implementation of the Australian-made Microbial Genomics Virtual Laboratory (microGVL) at the UK’s CLIMB project will be officially launched at Warwick University over 14-15 July. The result of a significant team effort, it demonstrates how international collaboration on research infrastructure projects such as the GVL, funded by Bioplatforms Australia and Nectar and now managed through the Victorian Life Sciences Computation Initiative (VLSCI) hosted at the University of Melbourne, can return benefits to Australians through ensuring world’s best practice in international microbiology research laboratories.

Public health authorities and researchers around the world are working hard to implement a new ‘gold standard’ in public health outbreak investigations, using the refined analytical tools now available to microbiologists through next generation sequencing technologies. This month we are pleased to report that Australian expertise and ingenuity has been implemented in the UK as part of its own efforts in this field.

The CLIMB project (Cloud Infrastructure for Microbial Bioinformatics) launched in April 2014 and is a UK Medical Research Council funded collaboration between Warwick, Birmingham, Cardiff and Swansea Universities to develop and deploy a world leading cyber-infrastructure for microbial bioinformatics; providing free cloud-based compute, storage and analysis tools for academic microbiologists in the UK.

Having bought and installed the necessary computer systems and created two new bioinformatics training centres at Warwick and Swansea, the next stage has focussed on implementing the software for creating a cloud (using Openstack), enabling the virtual machines to communicate with the platform’s storage and integrating the four sites.

Over the past two years VLSCI expert bioinformaticians led by Torsten Seemann and Simon Gladman have been developing the microGVL.  In 2015 they demonstrated it to their UK public health colleagues who expressed interest in implementing it at home.

So in March this year, Tom Connor, bioinformatician and CLIMB lead at Cardiff visited VLSCI for a crash course on the microGVL and a great deal was achieved then and since:

The microGVL is now contributing to CLIMB achieving its vision (as stated on its website) to bring bioinformatics capability (computing power, storage and analysis tools) to microbiologists working in UK academia…  It will also be a useful training tool for the delivery of workshops and meetings to train, share knowledge and develop the greater microbial bioinformatics community.

The GVL, and now the microGVL, is an exemplar of great Australian research collaboration and ingenuity: a virtual laboratory which brings the tested tools of bioinformatics to biologists who are wanting access to those skills. Such international recognition is further demonstration of Australia’s capacity to compete in these complex, technically sophisticated fields.

This has been a great team effort. We wish CLIMB every success and look forward to working with the team more in the future.

For more information about CLIMB, go to www.climb.ac.uk.

For more information about Nectar, the Research Cloud and the Virtual Laboratory program, go to www.nectar.org.au.

BioPlatforms Australia and Nectar are supported by the Australian Government through the National Collaborative Research Infrastructure Strategy (NCRIS) – see www.education.gov.au/national-collaborative-research-infrastructure-strategy-ncris.